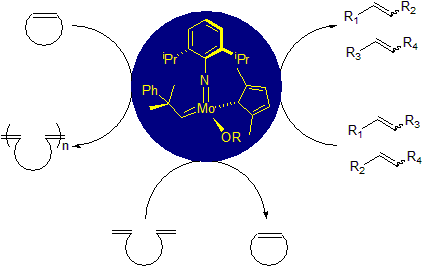 Metathesis Portal. First reported in 1955 by Anderson et al. using a Ti(II) catalyst, for the polymerization of norbornene,1 the metathesis reaction gained interests and popularity over the last decade. Further investigations in the mechanism of the transformation by Chauvin sparked the development of novel more well-defined metathesis catalysts.2 Independently, Grubbs and Schrock reported novel functional-group tolerant catalysts.3,4 This breakthrough in olefin metathesis was rewarded in 2005 by a Nobel Prize to Chauvin, Grubbs, and Schrock for their contributions. The development of this technology over the years, brought to the forefront the use of Molybdenum, Ruthenium, and Tungsten as metals for metathesis.

Early development and design of these catalysts highlighted 2 main systems, a Molybdenum-based one and a Ruthenium-based one. The Molybdenum system, mainly developed by Schrock and his group, is highly active to a broad range of substrate but has limited tolerance to certain functional groups and has high air and moisture sensitivity, making its use more limited. The Ruthenium system, mainly developed by Grubbs and his group, is less reactive than the Molybdenum system but is more tolerant to a variety of functional groups and is less air sensitive.3,4

To remedy the air sensitivity of the Schrock systems, XiMo developed a new process to encapsulate various Molybdenum based catalyst in microcrystalline wax. This wax protects the catalyst from air and allow the setup of reactions for metathesis with less drastic conditions. As a proof of concept, the team of researchers at XiMo ran several cross metathesis and ring closing metathesis reactions using basic schlenk techniques.